The Story Behind the Debate Team That Could 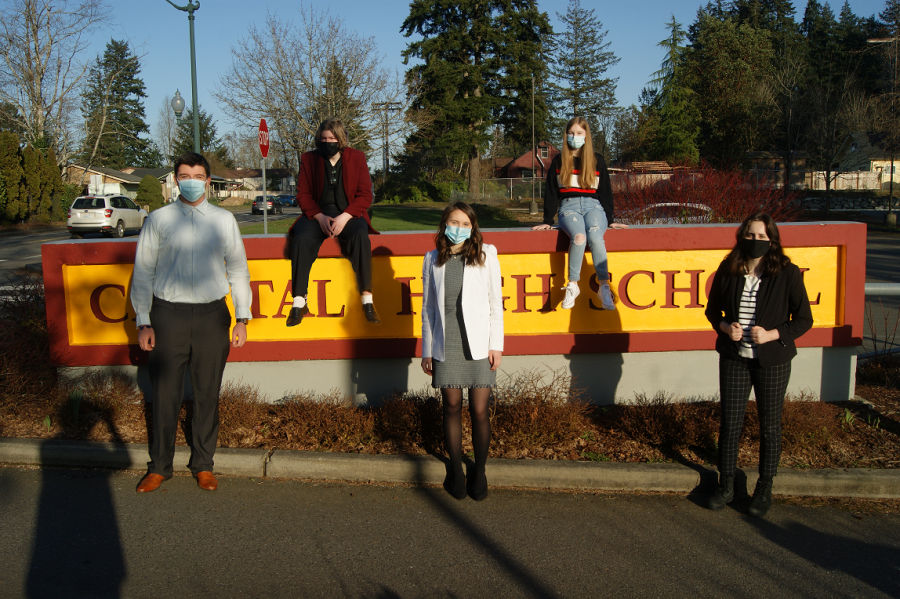 Capital High School debaters are racking up major wins in the last tournaments of their season.

“Our national debater is a freshman!” Vice Principal Anderson proudly shared with CHS staff in an email announcing the winners.

“It’s so exciting to get the chance to have Capital represented on the national stage, and I know Meredith will represent us well,” Coach Moore said.

Four other students also came out champions at the tournament, winning qualifier spots as alternates at the NSDA national competition.

“I am extremely proud of Charles Norris and Kaloyan Menser who earned top spots in Public Forum debate, Tyler Zabolio who is a runner up in United States Extemporaneous speaking, and Jack Grippo who is an alternate for International Extemporaneous speaking. All of these students have qualified to represent not only Capital High School at nationals, but all of Western Washington.”

The national-qualifying tournament, also known as districts, is a yearly debate competition between the schools of Western Washington and Alaska that takes place in early March. It is followed by the state competition which includes schools from all over the state of Washington, vying for the titles of state debate champions.

“Capital debaters have worked extremely hard this year,” says Coach Moore. “There have been good times and bad times. It’s not been easy, especially dealing with this virtual tournament format. We have lost a number of debaters along the way, but those that have stuck with it have seen the rewards.”

Those rewards are both internal and external. Debaters who place in top spots at tournaments bring home trophies and medals. For the district tournament, Morgan earned a commemorative plaque, while Norris, Zabolio, Menser, and Grippo all earned trophies signifying their impressive wins.

“But the most important reward of all,” says Coach Moore, “is the fact that you can work hard at something, put a lot of effort into it, and have it be recognized by other people. That doesn’t happen with every debater, and it doesn’t happen all the time. When it does, though, you have to celebrate the success.’

When asked what Coach Moore would like to see from the CHS community regarding the celebration of the debate team’s success, he said, “This month, I hope everyone takes the opportunity to celebrate not only the debaters who were recognized for their hard work at the recent tournaments, but those who worked hard and didn’t make it. Debate is an extremely subjective thing. Judges all have their own preferences. But when everything lines up as it should, you have to take the wins and be grateful.”